Five weekend projects to prepare your home for summer
Dark walls, dark roofs – take care with this hot industrial style
What the hygge? The Danish concept of cosiness in house design
Storm damage? Here's what you need to know about your insulation
Jargon busting - 5 technical terms to know before building a home
Top 7 tips for a warm winter home without blowing the energy bill

Choosing the right insulation and understanding R-value
What makes glasswool insulation effective at trapping heat?
How heat flows through walls
Where to insulate in your home
Why should you insulate your home?

Covid-19 Update - 12 August 2020
Be in to win a Healthy Home Do-over valued at up to $10,000
The Healthy Homes Guarantee Bill is passed by the new Government
DesignSmart Technical Services launch
Bradford Scoresby facility officially opened by EGM and Hon. Wade Noonan
Bradford disproves the myth that insulation causes a summer hotbox
CSR Bradford’s use of waste materials as a key resource
Experts in roofing choose Bradford and Edmonds products
Looking to the future, honouring the past
How does household condensation and mould affect your health? 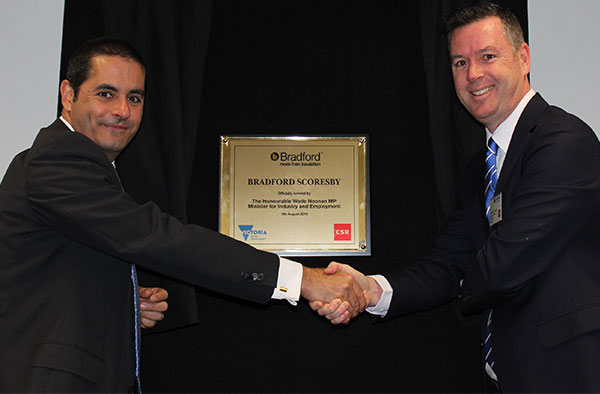 The event began with a site tour and followed with a brief address from Mr Tannous and Mr Noonan, whom then went on to unveil the Bradford Scoresby plaque.

Our new Victorian manufacturing facility will be a significant contributor to the local economy with improvements in capabilities and capacity. The Victorian Minister for Industry & Employment was complementary of the scale of the investment, as well as the contribution to local manufacturing and the retention of local jobs.

Bradford's wide range of products are featured in homes and buildings across New Zealand and Australia. Read now >